Mr Reid began his address by welcoming all to the restricted event held in St Patrick’s church; he also welcomed those watching on Facebook. He said that he looked forward with anticipation to a time, hopefully soon, when we as a school community could again come together without restrictions.

Mr Reid continued “There are certain events and days in life that stick in one’s mind, believe it or not I am just old enough to remember the assassination of President Kennedy, other days such as the death of Elvis or 9/11 also stand out in my mind; the 12th March 2020 is also a stand out date, the date of the first lockdown. There was a surreal atmosphere in school, a mixture of fear and exhilaration and that announcement has framed and shaped school life since then.”

Mr Reid said that he mindful that some school families had been greatly impacted by Covid-19, he offered the sympathy and support of the school and prayed that God will meet each person and each family at the point of their need. The principal continued “School life has been greatly curtailed over the last 18 months with a number of events and trips cancelled and others greatly scaled back”. He said that on return to school he had asked for cooperation, forbearance and prayers. He was pleased to report that that he had maximum cooperation from both staff, students and parents.

Mr Reid continued “On-line learning was a steep learning curve for us all, with google docs and google meets, zoom and Teams all making their way into our lexicon. While the different forms of doing school were interesting and challenging, early predictions that students could stay at home all the time, and that teachers would be surpassed by technology, thankfully fell out of favour by the end of the second lock down. I think everyone, students’ parents and teachers were delighted to get back to a degree of normality, I for one was delighted to hear the sound of young voices in the corridor, a school without students is like a restaurant without food.”

Sticking to the analogy Mr Reid continued saying that “The Monaghan Collegiate restaurant is again serving a full menu, but over the last 18 months we have changed a few of the “kitchen” staff. Just at the start of lock down, Bishop John McDowell was elected Archbishop of Armagh and Primate of all Ireland, Mr Reid said that obviously everyone was delighted at the news, and wished Archbishop McDowell God’s richest blessing in his new role. The school greatly appreciated all his support and guidance over the past number of years. Mr Reid said that he was delighted to welcome the new Bishop of Clogher, The Right Revd. Dr Ian Ellis to the school community. Commenting that he had the privilege of teaching Bishop Ellis’ two sons at Armagh Royal. Bishop Ellis had chaired the last two Board of Governor meetings and Mr Reid said that all present were struck by his efficiency and humility.

He said that he was delighted to welcome, Ms Donna Adams, Mr Warren Stewart, Mr Colin Deering, Mr Daniel McGregor and Ms Tracey Farrell to the staff, all experienced teachers with their family roots in the local community. Internally there has been a number of knock-on changes, most significantly the appointment of Mr George Dugdale as Deputy Principal” Summing up the changes in personnel, Mr Reid said that he was confident that Monaghan Collegiate School was ideally placed to meet the needs of a new generation of young people post pandemic.

Turning to the students Mr Reid said that he had no doubt that they would retell stories of lock down, and how they had to wear masks etc. to their children and grandchildren.  But Mr Reid said that, what has happened over the past year and a half should not be allowed to define their future, either academically, or emotionally.

Turning to these two themes the principal said that academically there were two years of a modified Leaving Cert process with teachers providing accredited grades based on internal tests. This process has led to grades inflation, pushing up the points required for admission to popular courses. Mr Reid said that the school had followed their own strict rules for arriving at the predicted grade, he said that the national standardisation and moderation of teacher awarded grades was almost impossible. Mr Reid noted that the legacy of the process would persist for some time, affecting competing year groups particularly students who completed their Leaving Cert in 2019 and also the present sixth form.

Mr Reid commented, that while some people may cast doubt on the rigour of the assessment process during the pandemic, students did not choose that path, they achieved their grades in the only system open to them and deserved full credit for their achievements. He said that the degree of disruption that the students had experienced was unprecedented in his lifetime, and he wholeheartedly congratulated last year’s students on their performance. Students from the Collegiate had taken up courses at a spread of universities and colleges in Ireland and the UK, others had gone into apprenticeships and training courses. Mr Reid wholeheartedly congratulated the young people and wished them every success in whatever course or path they had taken.

Concerning the emotional toll of the lockdown and restrictions imposed Mr Reid said that the history had yet to be written, and he had no doubt there would be lots of political spin put on whatever information came to light, however Mr Reid said that it was quite clear to him that the lack of social interaction experienced by young people had a detrimental effect on their wellbeing. Mr Reid said “We all need relationships; family, friends, school, work, church; each of us has been designed to live in positive relationships. Our young people have those positive relationships at hand, and so I am confident that with the love of family, the support of school and the help of God each student here today can face the future with real enthusiasm. I can’t end this little section without exhorting students to form real friendships not virtual ones. The revelations that have recently surfaced about “Big Tech’s” manipulation of young people is deeply worrying; folks, real people cry wet tears, not emojis”.

Mr Reid reported that wellbeing had taken a much more central role in the curriculum and was now fully embedded in Junior Cycle. He said that, to give legs to the inclusion of wellbeing, the school had with the help of two members of the Board installed a wellbeing track around the school pitch. He thanked the members for their imitative and said that it was most gratifying to see the large number of young people using this walkway in small groups, chatting and laughing.

He also reported that with the help of the Department of Education the school had erected a substantial canopy providing space for alfresco dining.

The school’s main and most exciting project over the next two years was the provision of a new sports hall. The project was at the design stage, and while with lockdown it was a frustratingly slow process Mr Reid said that he looked forward in expectation to see it through to completion.

In terms of student performance, student wellbeing, and the provision for our students, Mr Reid said that he was happy to confirm that Monaghan Collegiate School was in a good place.

In his concluding remarks Mr Reid said that it had been a year like none other with no opportunity for extra-curricular activity or cooperate school events, and so his report was very different from other years. However, with all the changes and challenges he finished by thanking who had ensured that Monaghan Collegiate School had functioned as near normal as possible over the past year and a half. He listed them as;

Finally he concluded by acknowledging that recent events had again highlighted human fragility and our dependence on God, but with that twin thought he said that the community could move forward with absolute confidence.

Mr Reid commended his short report to the Chairman of the Board of Governors and invited the Right Revd. Dr Ian Ellis to address the students. 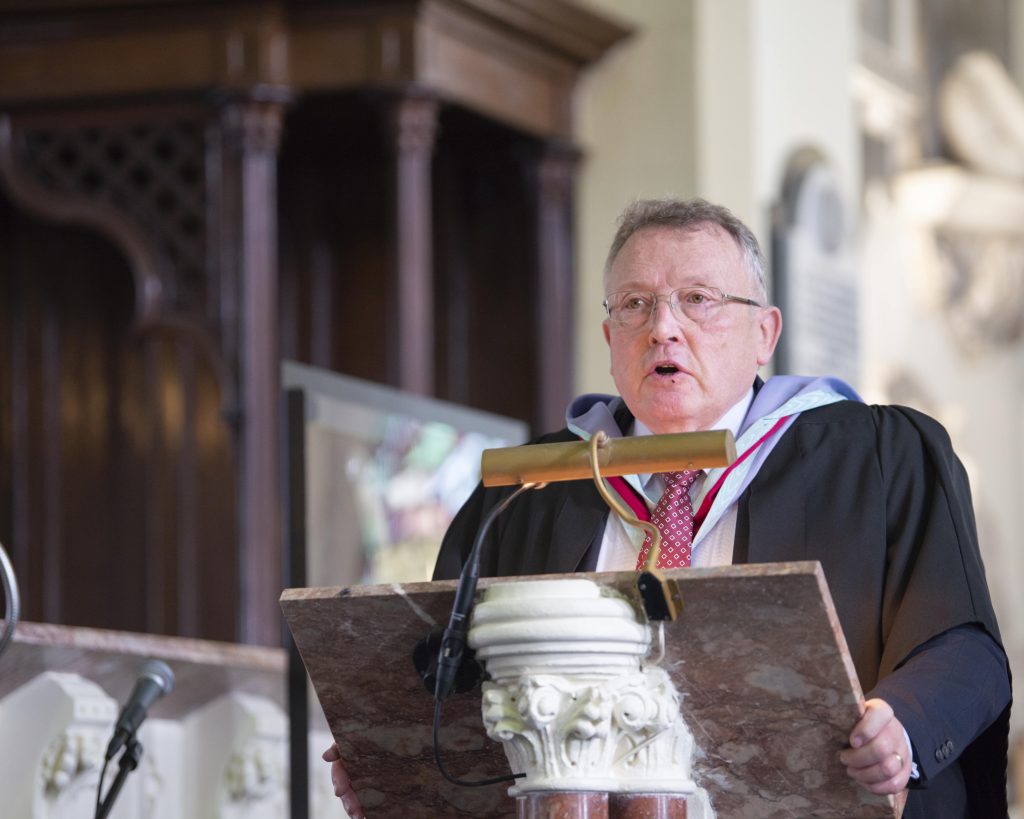 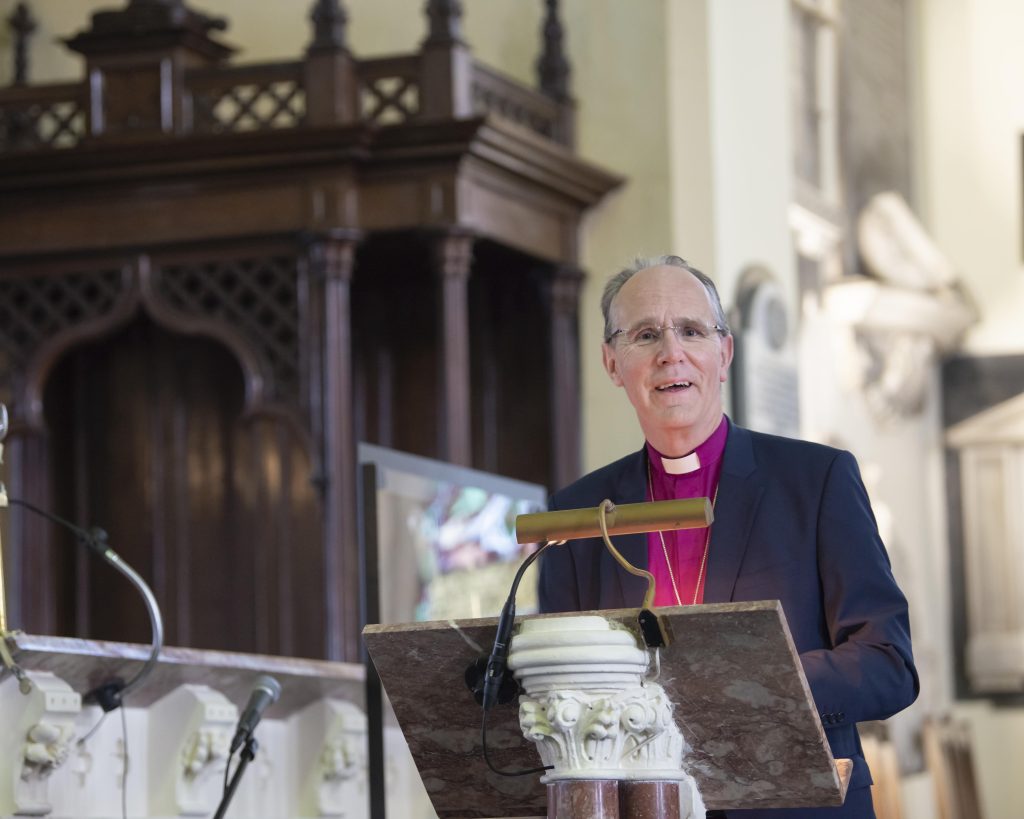 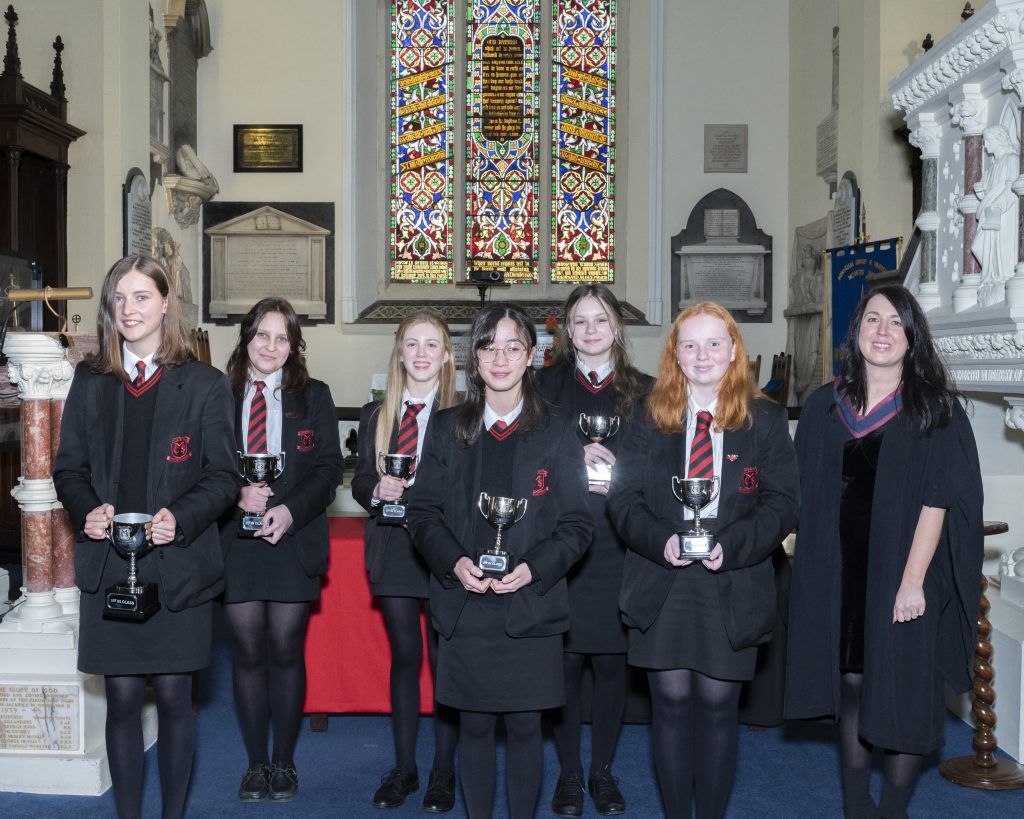 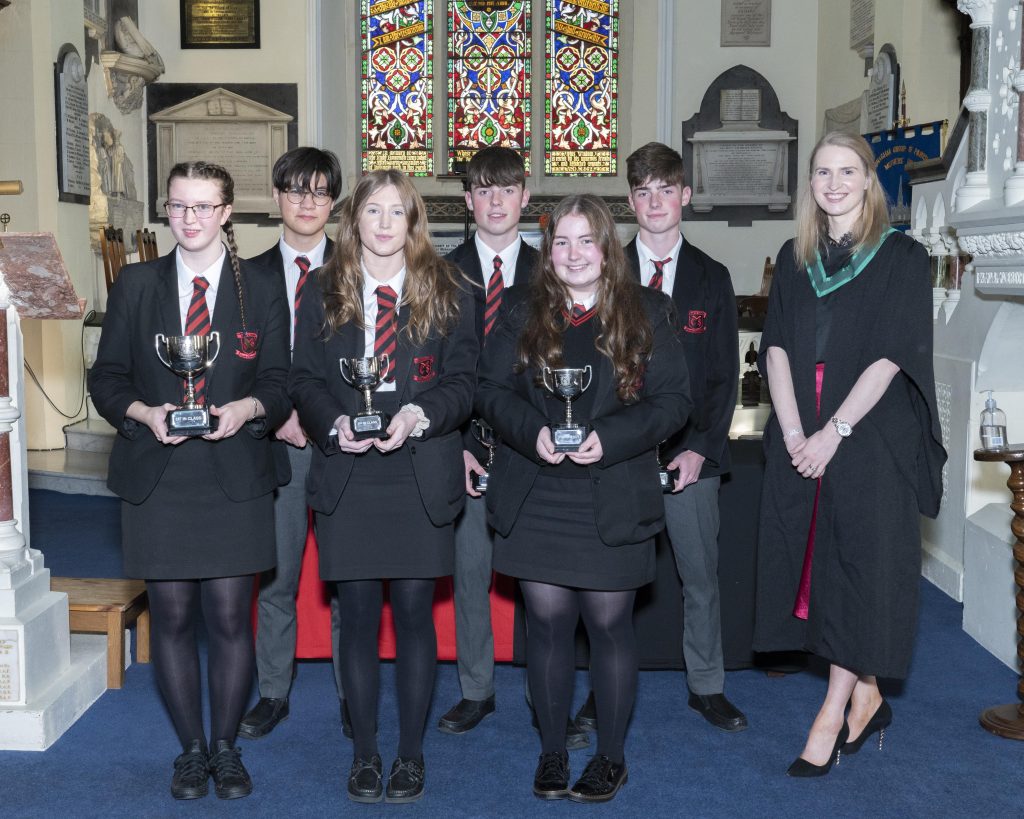 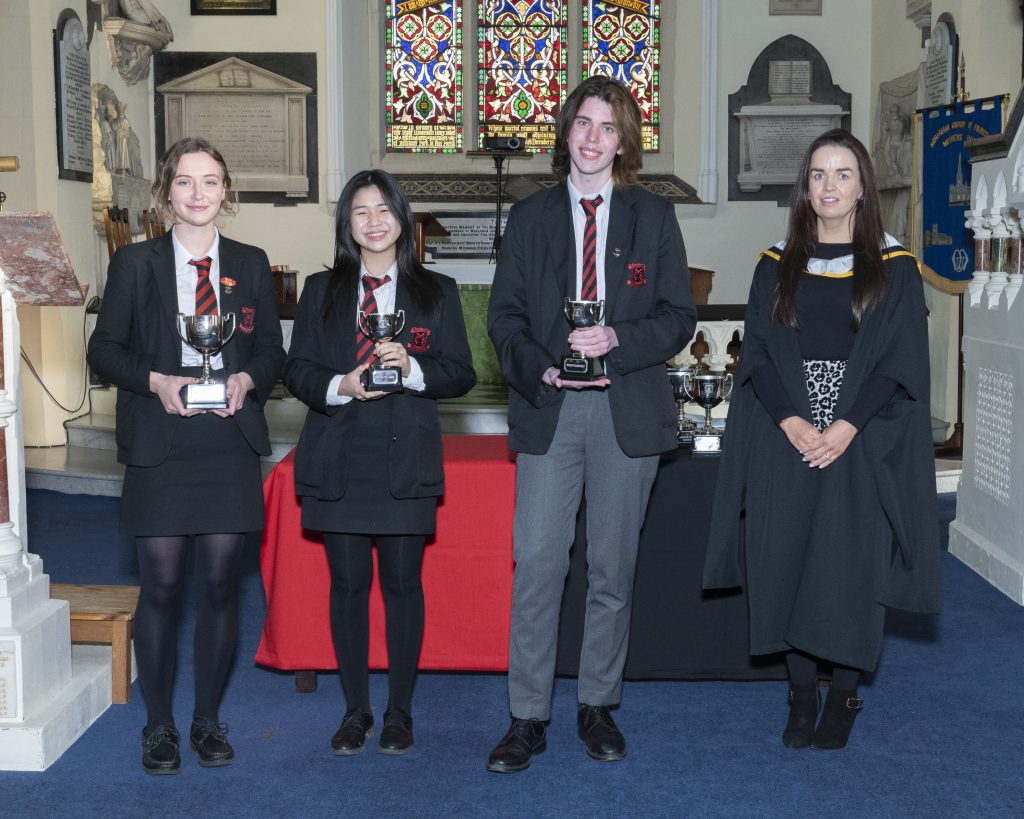 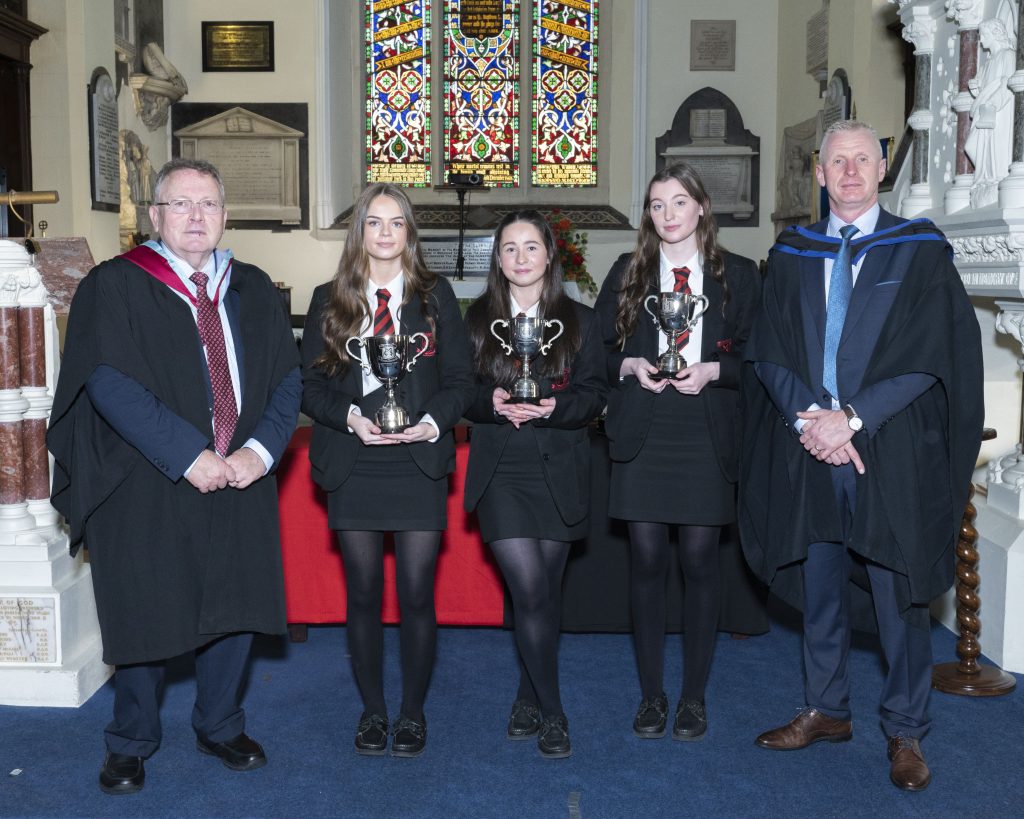